Thumbs at the Ready 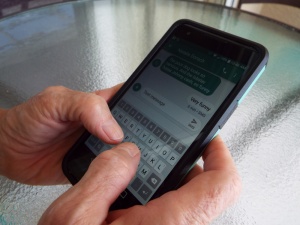 The Department of Health and Human Services reports that children spend more than 7.5 hours daily in front of a screen which is a concern among two-thirds of parents. Even teens are beginning to recognize that they spend too much time in front of screens. Some parents are taking steps to reduce their children’s screen time and technology companies, in order to address this screen addiction, are implementing features to measure and warn people of excessive screen time.

I was recently reminded that the issue of screen time is not new. There was a time that children in particular spent hours sitting zombie-like as if in a trance within a foot of a 20 inch TV. Responsible parents in those days would admonish their children to back away from the screen for fear of damage to their eyesight. Children usually ignored these requests and the parent would just have to turn the boob tube off.  This is much harder to do these days what with the proliferation of the small screen devices such as tablets and smart phones that children as young as 3 have in their personal possession.

The problems associated with device addiction and excessive screen time not withstanding it seems that the these small screen devices, especially the smart phone, are having a detrimental effect in people’s behavior and general posture.

Behaviorally we see it all too often in social settings both at home and in public where people are immersed in their screens rather than interacting and enjoying the company of others they are with. When asked they will usually respond that they are doing both. People no longer see it as rude to ignore the people you are physically socializing with but that it has become acceptable to “multitask” in this way these days.

People seem to whip out their phones like an old wild-west gunslinger drawing their gun at the slightest prompt be it a notice of a message received or just the irresistible urge to let some “friend” know what they are doing, like crossing a street, or what they are eating. Invariably this quick draw action will be followed by rapid thumb action. How some people can thumb the small keyboard-like image so furiously without making copious mistakes either in spelling or grammar is a mystery.

If you ask a chiropractor they will probably tell you that a posture of having your head constantly bent over looking at a small screen is not good for you yet everywhere we look that is what we see in people of all ages especially among the youth including the teens and 20 -30 somethings. It’s not so much the head bent over posture which people do to read any material—books, newspapers, magazines, etc.— it’s that it is being done while walking, biking and more dangerously while driving, something rarely seen when people are reading paper media. Why the difference? Is what’s happening on the small screen so much more enticing?

Another popular posture is the phone leading posture. This is where a person is talking loudly while holding their smart phone out in front of them horizontally at about neck height with the speaker turned on so that all around them can clearly hear the entire conversation. If this isn’t bad enough they are doing this while walking down a sidewalk within earshot of other pedestrians.

I go to the Y several times a week. Lately I’ve been seeing 20 somethings constantly on their phones, thumbs at the ready, between every exercise set. What are these people doing, I wonder? Are they engaged in business and are so important that they can’t let it go even between sets? What is so important about all the messaging that takes place? Or is there some entertainment thing going on? Admittedly some are just using their phones to listen to music but maybe some just have a need to keep their thumbs busy.